I created this as part of a multimedia team project at the Management Seminar for College News Editors (informally known as MSCNE, pronounced “em-scene”) at Grady College at the University of Georgia.

Our team of nine as given our assignment at 5 p.m. on Wednesday and had until 9 a.m. Thursday to complete a lead story, sidebar story, photos, video, data analysis and an infographic. I had absolutely no experience with data pulling or designing, so naturally, I volunteered for both. I had no choice but to become an expert — and quickly.

At first, I was overwhelmed with the data. I had so many questions I felt that I needed to answer with it, but as time ticked down, I needed to prioritize. What I deemed most important and most feasible ended up on this graphic.

I used a free online program called Piktochart to create the image, which had text, icon and chart tools. However, I didn’t use a template — I started from scratch. The image you see is a product of at least seven hours of work.

I felt like I had blinders on while I worked on this. I wanted to ensure it was functional and beautiful, and I think I accomplished some of both. I felt like I not only accomplished the task, but I met my own high standards.

Compiling the data and creating this, ensuring it was functional and beautiful, was easily the best part of my week in Athens.

Let me revise that: It’s going to be a long exciting, challenging, action-packed and wonderfully transformative rest of 2014.

In a few short weeks, I’ve settled into the editor-in-chief office (and added a couple decor pieces—more to come about that) and published the first of about seventy issues of The Kansan under my leadership.  It’s smooth sailing (so far), and we’ve made tremendous strides as a staff.

Traditionally at The Kansan, we publish our print issue and transfer those stories to online posts. It’s my goal to reverse that, starting three weeks ago. (IMO, it should have been at least one year ago!)

For this first issue, every story was published online before it appeared in the print edition—some as full stories, some as excerpts from longer stories that we updated as soon as we sent the paper. We published online briefs, updated them online, then revised them for print.

That, to me, is an incredible success that’s long overdue.

However, there is much room to improve. Most of my week is being spent meeting with many, many professors, advisers and staff members to hear their thoughts on the issue and the website (which, by the way, is a nightmare. How many days until we don’t have to deal with a hard-coded WordPress site that no one can seem to figure out?)

I’m trying to thrive with criticism. I’m realizing this job is all about receiving it—the good, the bad and the ugly—in stride every single day and adapting when necessary. For a naturally-stubborn 20-year-old female me, that’s definitely an area I’ll need to improve.

I got a taste of juggling one thousand things at once when I was news editor, but as editor-in-chief, it’s increased tenfold. Among the things I’m currently thinking about:

It’s increasingly important for me to take a step back and think about what we’re doing well and how far we’ve already come in three weeks time. It’s important, also, to get out of the sub-zero-temperature newsroom and get some sun, warmth and positivity a couple of times per day.

For the times when I can’t, though, I’ve invested in a $4.99 clearance book from Urban Outfitters that I keep at my desk. 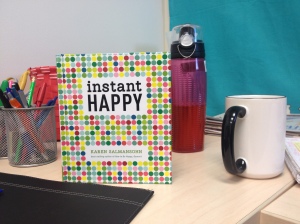 It’s chock-full of inspirational, cheesy and positive mantras. I even brought it to production on Sunday in an attempt to motivate the staff while working hard from noon to midnight on the issue. Mostly, though, they just laughed at me.

That brings me to arguably the most important thing I’ve done in the past week—I hung a tapestry in my office.

1. We and our problems, complications or challenges are very, very small in comparison. It’s all going to be fine.

2. There is so much to explore and so many places to go in this life. Go while you’re young.

I posted this photo to Facebook, and the best response I received was from my dad’s best friend:

I love that. I’m going to rule my “empire” as best I can. (Although I’ll need to invest in some more pushpins first.)

I’ve been in full swing as the news editor at The University Daily Kansan for just about two weeks now. I’m still alive (barely), but it didn’t take me long to figure out a couple of things about my job that I can look forward to for the next ~13 weeks:

Napping has become somewhat of a foreign concept to me since becoming news editor. Before January, I was on a roll, continuously breaking my record for hours napped in a day when I was at home. However, despite having only one class on Tuesday and Thursday mornings, I’m incapable of taking an hour-long nap.

Case in point: today, I came home from the newsroom and did a couple hours worth of homework. My schedule was looking clear from about 4:30 to 5:30, when I had to go back to the newsroom. Ahhhhh, I thought, look at this whole entire hour I have to do nothing but sleep and rejuvenate!

I’ve been a vegetarian since May. When I moved out of the dorms into my first house, it took me about a week before I realized, holy crap, I actually have to cook for myself now. And it took one trip to the meat aisle in Dillons to realize that being a carnivore is freaking expensive.

So, I cut out meat, except for my grandma’s homemade chicken noodles at Thanksgiving (because obviously). That is, until this week.

After leaving the newsroom on Monday at 12:10 p.m., I told myself I was having a really long week and impulsively bought a Brella’s Tuscan Turkey wrap from The Underground (I couldn’t spring for the Crunchy Chicken Cheddar wrap just yet.)

I wouldn’t call it life changing, but it changed my life this week. I’ve been on a downward spiral from vegetarianism. I bought a chicken burrito from Chipotle and chicken nuggets from Chick-fil-A. I told myself I’m just taking a week off, but we’ll see how well I hold myself to that…

3. Nightmares re: the paper are REAL.

At 4 a.m., I woke up in a cold sweat. I snapped up from the comfort of my $8 Target pillows in terror. The front page, I thought, do all the stories have news hooks? Did copy print the right headline? Is there a correctly imaged photo above the fold? God forbid, what if there’s a mistake?

It’s not an uncommon occurrence. I’ve made a ton of mistakes in the first two weeks regarding these things (among others). On one hand, it’s made me break down and cry in the corner chair of my room, hunched over the day’s edition.

But it’s made me a better editor and leader.

I’m glad I got some of these mistakes out of the way early, because there’s only room for improvement. Each day, I get better at questioning and justifying my decisions. I get better at paying attention to little details. I get better at being a cheerleader and supporting my hard-working staff.

Still, most days, I have to pick myself up, learn to grow from the criticism and remind myself that I am brand new at this (I’m a 19-year-old sophomore.)

As overwhelming as it has been in the past two weeks, each day gets easier. Only 97 more to go.