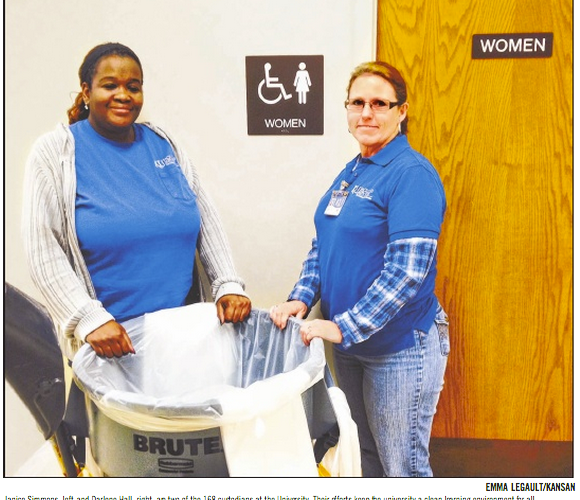 This article appeared in the Dec. 12, 2013 edition of The University Daily Kansan.

“But you know what I ended up as? Cleaning,” she said with a laugh.

Simmons has been a custodian at the University for 22 years—longer than some students have been alive. Every morning at 6:30 a.m., she starts her shift in Zone 5 (in Spencer Art Museum and Spencer Research Library) vacuuming, cleaning the entryway floors and cleaning the bathrooms.

“Nobody when they’re young says, ‘I’m going to grow up and be a custodian,’” Darlene Hall, Simmons’ Zone 5 custodial manager, said. “It’s not a glamorous job, but it’s got benefits and perks to it. It does feel good when you take something that’s bad and you make it look pretty.”

Simmons has a sense of pride in what she does, especially after the laborious task of stripping and waxing a floor. But when it shines, people notice.

“Everybody’s like, ‘oh, your floors, they look good,’ “ Simmons said.

Without hesitation, Simmons said the bathrooms are the most dreaded part of the job.

“I go into some of the bathrooms and it’s like, do you guys really live like this?”

Simmons said with a sigh. “[There’s] a toilet full of crap, still sitting in there from the day before.”

“Or there’s paper all of the floors,” Simmons added. “Come on now.”

In addition to the daily workload, Hall is responsible for fielding emergency calls from other buildings throughout the day to her team of seven custodians. Although Janice and her coworker don’t have access to a vehicle, they recall one assignment they were sent on involving a brown, sticky mess left for them on a staircase.

“It’s like we needed a facemask to clean it up,” Simmons said. “Those are the kinds of jobs we have to do.”

The praise they get is few far between, but it makes the miserable moments worthwhile.

“There will be a few students who will not even get out of your way and look down on you, but then you’ll pass one that will just look at you and say thank you,” Hall said.

In July 2012, Facilities Operations merged with Campus Housing to operate under one blanket department: Facilities Services. It includes everything from maintenance and construction services, to business administration, to energy management.

Now, there are six zones on campus, each with a team of members from each component of Facilities Services.

Gavin Young, assistant director of strategic communications, said they combined to save the University labor costs. This means they also eliminated about 12 to 14 supervisor and director positions to “create a more streamlined organization.”

Simmons and Hall are still adjusting to the new zone system. Both were part of the Facilities Operations branch before it merged with housing.

Hall said the difference between the two is the times when each is busiest: housing zones can’t do a lot during the year because students live in the rooms, so they work on most projects in the summer. Hall’s zone does projects during holiday breaks.

“Even though it’s one now, it’s still kind of us and them because it’s so different,” Hall said.

Facilities Services is also one of five non-faculty “job families” in Phase One of the Classification and Market Study at the University, which was completed early last month. The study better defined job titles and developed a salary range that reflects similar jobs in the market.

CBIZ, the study’s consultant firm, recommended an annual starting salary for custodians of $22,000, which is below the US Department of Health and Human Service’s poverty guideline for a family of four by $1,550. However, the University raised the minimum salary to $24,000, with a maximum of $34, 181.37. Applicable pay increases were reflected in workers’ paycheck last week.

In addition to a salary, Facilities Services workers receive health, vision and dental insurance through the state, vacation and sick time, nine paid holidays per year, life insurance benefits and access to the gym in Robinson during certain times of day.

Before the Facilities Services merge, Simmons said there were periods of time when staff members’ salaries were frozen, or they were locked out of a raise.

Despite the study’s effects, Simmons said she feels she should be making more.

“Twenty-two years,” she said with a contemplative chuckle.

When Simmons was laid off from Scotch Cleaners, she found her custodial job through a brother who worked at the University. She had two children at the time and the generous health insurance benefits appealed to her.

Simmons has a spunky, motherly—and slightly intimidating—demeanor. She lives with one of her daughters, Patricia, and her three grandchildren, and after Simmons’ shift ends at 3 p.m. she manages an in-home daycare. Combined, she can have up to 13 kids running around her house on any one afternoon.

The people she visits with and the people she works with everyday are like family to her, too. Her coworker, a young mother of a one-and-a-half year old girl, often asks for Simmons’ parenting advice during their shifts together.

“I treat her like she’s my daughter,” Simmons said, smiling. “I try and keep her on track.”

“They know mom’s a hard worker,” she said. “They respect that.”

Anybody can clean, but it takes an eye for detail, patience and a good attitude to be a custodian. In the eight years Hall has been a supervisor, she said she’s seen some who claim they have experience, but lack these key qualities. She appreciates her team’s dedication.

“It’s nice working with a group of people that knows their jobs and they don’t have to be babysat,” she said. “I can count on them to get their work done.”

The amount and type of work Facilities Services does is what keeps the University running day to day.

“In a very small way, it’s our way of contributing and helping the students become successful,” Hall said. “Because if we’re not here…”

If you’re my JOUR 304 teacher and would like to see a copy of the voiceover script, click here. 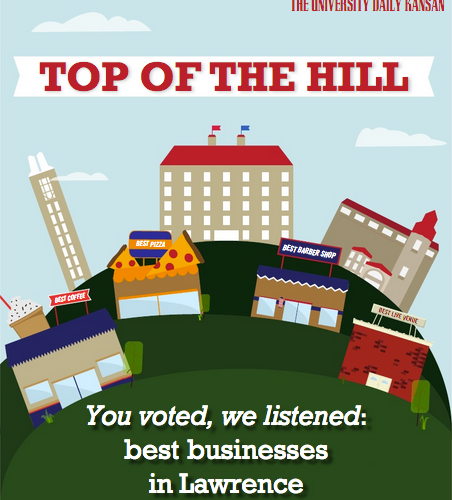 When I looked at the 2012 Top of the Hill special section, I noticed two things: there were only pictures of buildings (boring) and there was way too much text for each winner that I didn’t care about (not to mention I found the blurb I wrote about Jimmy John’s…yeah, I forgot about that, and for good reason.) I knew I wanted to be exciting, so every category (about 40) in the issue has an alternative story format or design accompanying it–you know, so people actually read it and care. I also think I broke the design team’s back (figuratively, of course!) by requesting so many designs, but I’m stunned that so much of what I wanted was included. I’m a happy special sections editor today. 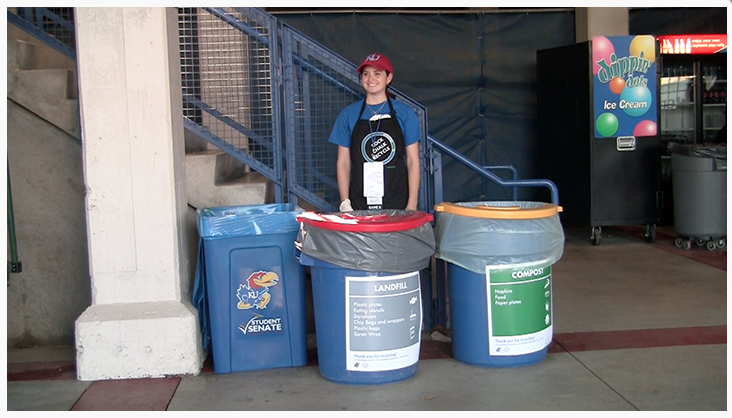 At halftime, two girls walk out of the chaos inside Allen Fieldhouse. Without skipping a beat, one chucks an empty Diet Coke can into the trash and continues her conversation with her friend.

Why would someone care about learning to recycle? Abarca’s answer is blunt.

“You don’t. That’s kind of the challenge,” he said.

(This article was originally written for a journalism course. It appeared in the University Daily Kansan on Dec. 3, 2013.) 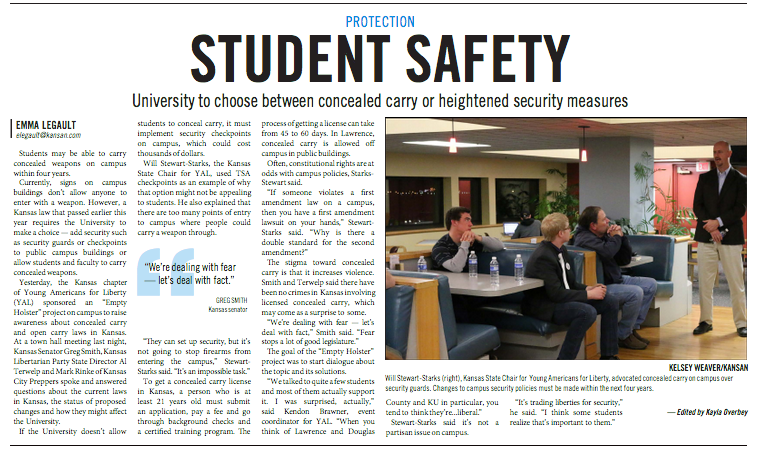 This was originally printed in the Nov. 20 issue of The University Daily Kansan. 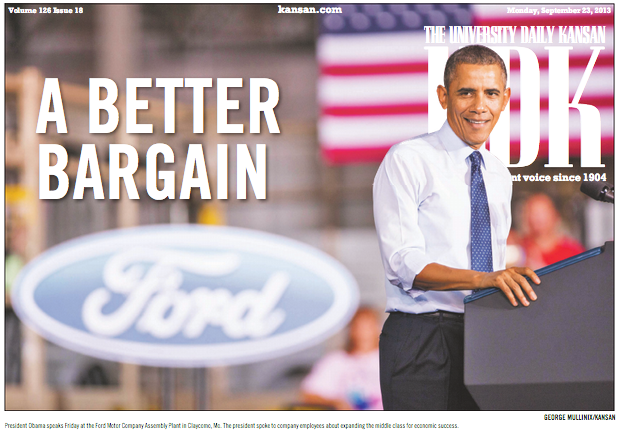 It was an early morning for myself and the rest of the UDK news team assigned to cover the President’s speech. I woke up at 5 a.m. for the 45 minute drive to Claycomo, Mo., where just eight hours later, I would no longer wonder what Barack Obama’s voice sounds like in person.

The day was a blur. We spent those hours waiting for a speech that took maybe 30 minutes. Barack Obama walked onto the stage in a blue button-down shirt and presidential navy tie which almost blended with the shades of industrial gray of the warehouse. iPhone cameras flashed (my own included) as he smiled and approached the podium. The first few words that echoed in the gray over the amplified microphone mesmerized me before duty snapped me back to reality.

I sat down and started typing. I looked up when he was done, but he had already descended from the stage and had disappeared once more.